How Meditation Affects the Brain

The world of neuroscience is revealing exactly how meditation affects the brain. I had the great honor to be invited to be subject on one of a series of studies being conducted on meditation. I was invited to the University of Wisconsin in Madison where the most thorough and cutting edge research is being done on the effects of meditation at the Center for Healthy Minds.  This remarkable complex of laboratories is part of the Waisman Laboratory for Brain Imaging and Behavior and the Laboratory for Affective Neuroscience. It was founded in 2008 by Dr. Richard Davidson, a researcher and contemplative. The center is dedicated to the study of positive qualities, such as kindness and compassion. It is on the cutting edge of rigorous scientific studies showing the effects of meditation on the brain.

Dr. Davidson’s credentials are amazing. To mention just a few, he received his Ph.D. from Harvard University in Psychology and has been at Wisconsin since 1984. In 2006, he was named one of the 100 most influential people in the world by Time magazine. In 2011, he was given the Paul D. MacLean Award for Outstanding Neuroscience Research in Psychosomatic Medicine. He serves on the Scientific Advisory Board at the Max Planck Institute for Human Cognitive and Brain Sciences in Leipzig from 2011-2017 and as Chair of the Psychology section of the American Association for the Advancement of Science from 2011-2013. Mindful Magazine published an article Richie Davidson is Stalking the Meditating Brian, which offers a wonderful overview of his research.

“Richie,” as he is affectionately known, has assembled a stellar team of scholars and scientists who are involved in a number of pioneering studies.  In addition to a brilliant mind, Richie manifests a big warm heart, which makes working with him a total delight. Dr. Antoine Lutz was the other principal investigator in the study I was involved in. Antoine’s research interests are in understanding the neural counterparts to subjective experience and, more generally, the mechanisms underlying mind-brain-body interactions.I was particularly taken with Antoine’s penetrating intellect, and his enthusiasm in the joy of doing good original science. He’s also a great runner, which he demonstrated in an hour long run with me around a lake. 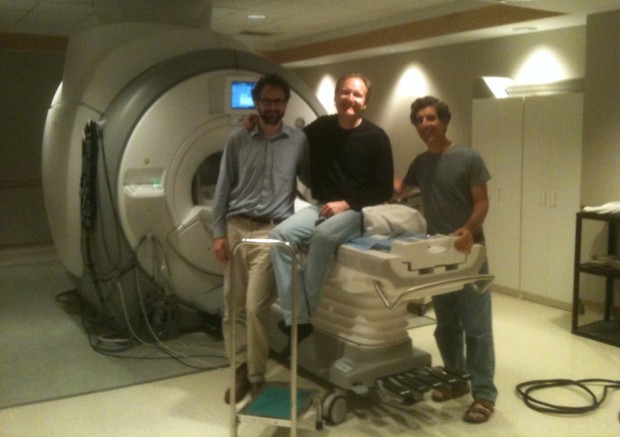 Richie is on my left, Antoine on my right in the photo, the machine is a fMRI brain scanner.

Richie and Antoine are part of a growing collection of contemplative neuroscientists that are changing the face of how meditation is viewed in the west. Most mental health labs are involved in the study of pathology – what doesn’t work, and what goes wrong. Their studies individuals who seem to possess unusual positive qualities, brought about by many years of intensive meditation. Somewhat associated with the new school of “Positive Psychology,” these positive mental health labs are slowly but surely having an enormous impact. The brain imaging studies (using fMRI’s and PET scans) track changes in the brain brought about by long-term meditation.

FMRI stands for “functional magnetic resonance imaging” and tracks real time changes in the brain. In other words, it is like a movie of what goes on in your brain as you engage in various mental tasks. In the study I was involved in, they were interested in learning about the effects of several types of meditation and how it might help in dealing with pain. A sophisticated pain induction device (using warm to really hot water) was attached to my left wrist, along with other devices to monitor my breathing, oxygen saturation levels etc. My right hand was involved with a working a simple keyboard that would allow them to see my responses to their questions, which were posted on a goggle screen. Once I was in the machine, they asked me, through a speaker and through the screen, to engage in a specific form of meditation.

Pain was introduced, and then I was asked to rate the level of pain in several different ways. I did the same thing with different forms of meditation. I had never been in an fMRI before, let alone for several hours. I was instructed not to move, not even a millimeter, which would adversely affect the images. With ear plugs in my ears (the machine is pretty loud), firm pillows to secure my head in this little “cage,” goggles above my eyes, gadgets attached to fingers and wrists, lying inside a thumping and clinging coffin, I was all set to enter a deep meditative state. I was fascinated with all these strange devices, and with the entire project. I found my first two hours in the machine easier than I expected. I thought it would be hard to stay so absolutely still for so long, and that perhaps I might feel claustrophobic. But none of that happened. I got into it. I did my best, and even though I never practice the types of meditations they asked of me while lying down (I usually meditate sitting up), I think I did okay.

To learn more about this amazing research and all the great work that they are doing, please visit the Center for Healthy Minds website.