Is Virtual Reality Getting Too Real?

Andrew In the News 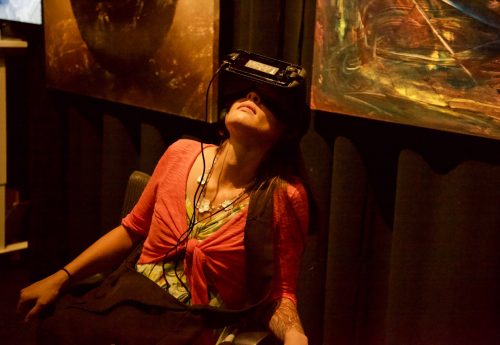 Is Virtual Reality Getting Too Real?

Tech moguls and gamers aren’t the only ones plugging into artificial virtual worlds these days. VR programs have helped treat phobias and PTSD, NASA scientists to envision life on Mars, and elementary schoolers to engage with science and history lessons.

VR has also taken up shop in contemplative communities. In the Colorado Rockies, a few early adopters are welcoming the new medium for its “explosive spiritual potential.” According to Tibetan Buddhist teacher, author, and gung-ho VR proponent Andrew Holecek, these emerging tools can—and should—be leveraged by Buddhist practitioners for spiritual insight, growth, and transformation.

In 2017, Holecek partnered with Jordan Quaglia, PhD, a neuroscientist and experimental psychologist (and director of the short film Seeing Through), to plug a bevy of modern-day masters and meditators into Quaglia’s cognitive and affective science lab at Naropa University for a study they published earlier this year. Participants were placed in terrifying scenarios, such as stepping off of a plank suspended high above a cityscape, to see how their grasp of the illusory nature of the experience affected their levels of fear. After taking their headsets off, many of the subjects remarked on the possibilities that simulated environments opened up, from facilitating experiences of empathy and emptiness to enhancing dream yoga and bardo training [the transitional journey between death and rebirth] to taking visualization practices to the next level. “They can’t stop talking about it,” Holecek reported. “It’s a big deal.”

But where some Buddhist thinkers see promise, others see serious red flags. Why create even more realities, they say, when we already struggle with the one we’re living in? Will this new wave of technology really enlighten the way we understand ourselves, or will it keep us distracted from and defined by our deepest problems? Such questions fueled a lively back-and-forth among Holecek, Quaglia, and a critic of their initiative, Elizabeth Mattis Namgyel, a veteran teacher of Tibetan Buddhism. The following debate is an edited version of the panel discussion that took place on July 8, 2018 at the Buddhist Arts and Film Festival in Boulder, Colorado.

Andrew Holecek (AH): Like any technology, virtual reality is neutral in and of itself and depends entirely on how it is harnessed. I like to think of VR as a kind of stem cell. Depending on what type of environment it develops in, it’ll either grow into a tumor or healthy, new tissue.

As we know, VR is already being used in unhealthy ways. The entertainment and pornography industries are running with it, and Facebook recently invested $2 billion in Oculus, one of the hottest tech companies in the field today.

There is a strong relationship between virtual reality and lucid dreaming, which is when you realize you are dreaming as it’s happening. It’s a fundamental Buddhist teaching that we have a delusional experience of the world around us, and to study the nighttime dream is to look head-on at a delusion inside of that even larger delusion.

In these vivid 3D systems, you begin to see the dream-like nature of alternate realities and can start to break them down. By extension, we can train ourselves to de-reify this reality. To borrow the language of dream yoga—the practice of using sleeping hours for spiritual development—you can bring insights of lucidity back into the primary delusion, back into this.

When I first did VR, the most transformative and lingering aspect came when I removed the headset. I looked around and thought to myself, Wow, look at the resolution here. What a remarkable app design this is. When the headset comes off, you realize how hung up you get in the “display.”

Elizabeth Mattis Namgyel (EMN): To be frank, I’m new to VR. But when I was hooked up in the [Naropa] lab I ran through a number of programs. I had a creepy clown drop down on top of me, a bus crash into me, somebody rush at my face with a drill, and enormous spiders crawl all over my body. In other programs, I was able to fly and flex my creative muscles by painting art in space. Yet I emerged from these simulations feeling like I had been enclosed in an airtight MRI machine—the virtual world seemed sterile and dead. You can argue that VR is neutral and has a range of benefits, but the medium is very unsettling.

As I wrap my head around the coupling of Buddhist practice and virtual reality, two things come to mind. The first is that it can be a tool for understanding the mind and the nature of reality, frequent visitors at any Buddhist dinner table. Buddhism takes a deep look at phenomena and tries to understand consciousness, how it manifests, and what happens when we misunderstand the fundamental nature of things.

VR creates and simulates experience, but why construct even more realities when we have so much difficulty relating to ourselves, our families, and our environment in a sane and clear way to begin with? Our bodies, on the other hand, know how to do this very naturally. When we eat, we know how to ingest the food, distribute its nutrients, and eliminate it. When it comes to the way we relate to our experience, we don’t know how to take it in, digest it, or let it go.

Are these new modalities really necessary to investigate the mind? The dharma helps us train the mind to become a reliable tool so we can engage in first-person science. The idea of needing tools “on the outside” is a very Western phenomenon—and a problematic one.

Jordan Quaglia (JQ): When they first screened the film The Arrival of a Train at La Ciotat Station in Paris in 1896, the 45-second-long recording caused near panic in the theater. The audience sprung from their seats and ran from what looked to them like a train headed in their direction.

I’ve now witnessed hundreds of people trying out virtual reality for the first time, and I can’t help but think of those 19th-century Parisians who were overwhelmed by the apparent realness of a virtual environment. In the lab, we’ve been studying why people react the way they do. A lot of it has to do with how well they can see through the illusion of a given situation while they’re in it—a level of insight that we’re calling virtual lucidity, which is analogous to lucid dreaming.

Our research suggests that it is not sufficient to know intellectually that you are having a virtual experience; you have to be able to translate that recognition into something more embodied. One of the biggest opportunities VR offers is a safe illusory space to explore our range of reactions to situations and what we project onto them.

To up the ante of our scientific study, we’ve asked people to ride a virtual elevator, walk on a wooden plank suspended 80 stories in the air, step off the edge, and plummet to the ground (video below). When we face our greatest fears, be it heights, snakes, or public speaking, we may be able to peel back some of the layers that cause additional suffering.

A new train is arriving, but it hasn’t fully pulled into the station. How and why we choose to get on this train will make all the difference in terms of tipping this technology toward collective benefit or harm.