The Power of Perspective: The Straw Effect

Take a look at your own experience and see if it’s not true: when the mind gets small, problems get big; when the mind gets big, problems get small. That is where the power of perspective can help. One of the biggest problems we have in life is loss of perspective, and how that results in unnecessary suffering. I’m paying more attention to how often my mind contracts around an issue, and how that shrinkage is directly proportional to my anxiety or suffering.

When I’m having a hard time, or wrestling with a problem, I’ll often step outside and stare into the night sky. It’s almost as if I’m mixing my mind with vast open space, ventilating my small mind with the nearly infinite space of the cosmos. In the Dzogchen tradition of Tibetan Buddhism, there is actually a sky-gazing practice, where meditators use outer space to invoke inner spacious qualities of mind. My informal star gazing is perhaps a variation of that.

I love astronomy, and recently saw a Nova program called Invisible Universe Revealed which is about the Hubble space telescope that totally blew my mind. In an effort to detect how many stars there are in the universe, scientists focused the Hubble on an empty point in space the size of a drinking straw, and kept it there for ten days.  It took an image that is referred to as the Hubble Ultra Deep Field image and is “the deepest portrait of the visible universe ever achieved by humankind.”  By doing so they were able to see further and further to the ends of the known universe. Everyday entire new galaxies came into focus. By the end of ten days, scientists detected some 10,000 galaxies in a sliver of space the size of a drinking straw!

More Stars in the Known Universe Than Grains of Sand 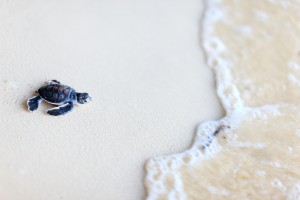 Each galaxy is itself composed of some 100 billion stars (our sun is one such star). Scientists therefore estimate that there are more stars in the known universe than there are grains of sand on every beach and every desert on earth!  (If you need to know, the number of stars they came up with is 20,000,000,000,000,000,000,000.) I’ve been in the Sahara Desert, and flown over it in a jet a number of times. I’ve been to many of the longest beaches on earth, and held thousands of grains of sand in the palm of my hand. There’s a lot of sand on this planet!

These zillions of stars are just what is in the known universe, which some scientists estimate is a fraction of what is really out there (estimates vary widely, but one estimate, based on the theory of “cosmic inflation,” states that the entire universe is at least 3×1023 times the radius of the observable universe!) Every time astronomers refine their instruments and update the data, the universe just gets bigger and bigger.

Some of the light from these deepest galaxies has been traveling at the speed of light (186,000 miles per second) for 13.8 billion years (!) to reach us. Sorry about all the exclamation points, but this data just blows my small mind wide open. It’s incomprehensible, truly exclamatory information. Astronomical indeed. To get some sense of the scale of the universe, check out this blog “26 Pictures That Will Make You Re-Evaluate Your Entire Existence.”

I use these stunning facts and mind-bending images as a deep reflection on the power of perspective. From the furthest reaches of outer space, our Milky Way galaxy, let alone our solar system, let alone our planet, let alone our country, let alone our state, city, neighborhood . . . let alone me is so infinitesimally small as to be comical. I’m not even a speck of dust on this scale. (Which is why Chögyam Trungpa once said, “The universe will not blink when you die.”)

Gaze Into the Night Sky to Put Problems in Perspective

This is not to belittle my place, or yours, in the cosmos, but just to put it in perspective. How big are your problems, really?  How monumental is that issue? How important is it to hold that grudge, to keep score, to maintain hard feelings? In the grand scheme of things, it’s beyond inconsequential.

So the next time you’re hurting, and feeling sorry for yourself, the next time your life seems to be falling apart, step outside and gaze into the night sky. Look up and lose yourself in the vastness of outer space. Remember the power of perspective, and notice how those problems instantly shrink to their rightful size.