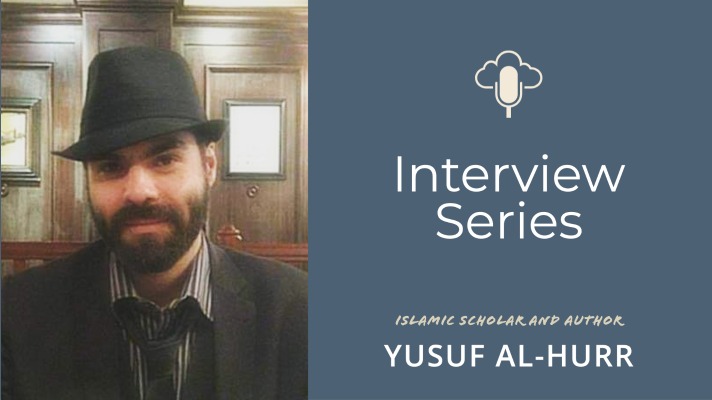 Yusuf al-Hurr transitions from the esoteric to the exoteric, and poignantly discusses the human side of this tradition as well as his own personal practice.

Join the scholar-practitioner Yusuf al-Hurr for a discussion about the foundations of Islamic mysticism, and the role of Sufism in Islam. Yusuf points out a number of common misunderstandings about the Muslim tradition, and some of the challenges in modern academic research into Islam. Who are some of the best authors in this field, and what are some of the finest books? Islam has transmission lineages very similar to the tulku tradition of Tibetan Buddhism, and meditations (like deity yoga) analogous to tantric practice. What is the role of art in Islam, and why is it more indicative of authentic spirituality than the words of some Muslim teachers? Yusuf al-Hurr transitions from the esoteric to the exoteric, and poignantly discusses the human side of this tradition as well as his own personal practice. This wide-ranging conversation lays the necessary groundwork and contextual framework that will allow a deep dive into how lucid dreaming fits into Islam, and even an Islamic form of bardo yoga (a follow-up interview scheduled for next week). Join this sensitive and rigorous scholar for an eye-opening look at the heart of this elegant tradition, and its relationship to Eastern thought. The internet connection to Baghdad was spotty at times, but this fascinating presentation is worth a close listening.

Dr. Francisco José Luis (Yūsuf al-Hurr al- Andalusī) was born in Luxembourg in a Portuguese working class immigrant family. He developed a deep interest for comparative religions and mysticism since his teenage years when he started practicing meditation. He completed two separate MA degrees in Indo-Iranian Studies and in French and Comparative Literature at the Sorbonne University in Paris before doing his PhD in Religious Studies at the School of Oriental and African Studies (University of London) on Sikhism. Yusuf al-Hurr taught at various universities (London, Toronto, Karachi) and his main research interests are Islamic mysticism and philosophy, Islamic art, the relations between Islamic, Christian and Indic forms of mysticism. While working on his publications he is also presently training in Arabic calligraphy and Middle Eastern music. He hates instant coffee.