Shamatha Meditation as a Preparation for Death

What Is Shamatha Meditation?

Shamatha meditation is a fundamental form of mindfulness meditation. Shamatha means “peaceful abiding”.”Mindfulness is the meditation common to all schools of Buddhism. It is the ground meditation upon which all subsequent meditations are based. Without a solid foundation in mindfulness, all the other practices become shaky.

Shamatha instruction is best received from a qualified meditation instructor, but there are many good articles (“How to Practice Shamatha Meditation”, Lion’s Roar 2017)  and books that describe the process.  See The Attention Revolution by B. Alan Wallace, one of the principal advocates of shamatha from a Tibetan perspective.  Jon Kabat-Zinn’s Wherever You Go, There You Are, is a classic on mindfulness. I’ve also written a concise meditation instruction book called Meditation In The I-Generation.

There are two central themes repeated throughout The Tibetan Book of the Dead, the most important guidebook in Tibetan Buddhism. The first theme is “do not be distracted.” This relates to the ability you cultivate in meditation to rest your mind on whatever is happening. The stability gained through shamatha meditation enables you to face any experience with increased confidence.

In life, and especially in death, distraction is a big deal. The French philosopher Blaise Pascal wrote, “Distraction is the only thing that consoles us for our miseries, and yet it is itself the greatest of our miseries.” Shamatha meditation removes the misery.

If we cultivate proficiency in this one practice alone, it will act as a spiritual lifeline that we can hold onto during the bardos (a Tibetan word for the after death states), and that will guide us through their challenges.

“I’m not afraid of death, I just don’t want to be there when it happens.” Woody Allen

Even for an advanced practitioner, it can hurt when the life force separates from the body. Resistance to this hurt, to death, or to any unwanted event, is what creates suffering. We can prepare to embrace the discomfort of death by embracing every moment with mindfulness now. Replace opposition with equanimity. As Dzogchen Ponlop Rinpoche says in his seminal book, “Mind Beyond Death”, “When we are a dying person we should be a dying person fully. Don’t try to be a living person when living is not what’s happening.”

When Your Body is Gone, Formless Shamatha Will Be Your Lifeline

Mindfulness is initially cultivated by practicing “shamatha with form,” or referential shamatha. This type of shamatha uses the reference of the body, breath, or an object to steady the mind. The idea is to use a stable form—while we still have one—as a way to stabilize the mind. When physical stability disappears at death, mental stability becomes our primary refuge. 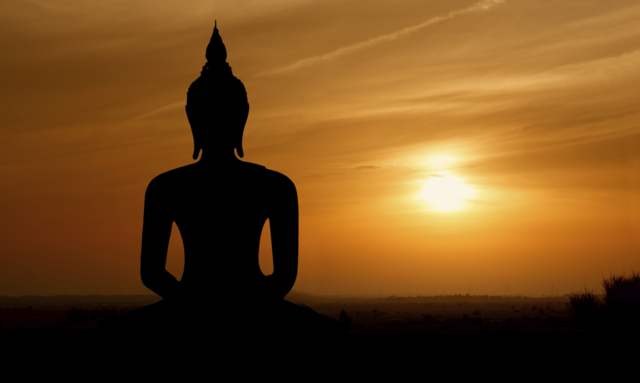 When we die, the anchor of the body is cut away and the mind is set free. If we’re not prepared for this freedom we may panic. Imagine being tossed out of a rocket into outer space. The ensuing freak-out impels us to grasp at anything that can reestablish a sense of ground. Like catching ourselves just before taking a bad spill on a patch of ice, we reflexively reach out to grab onto anything that keeps us from falling. This grasping reflex can spur us to take on an unfortunate form—and therefore, it is said, to an unfortunate rebirth.

Formless, or non-referential, shamatha is important because when the body drops away at death, we no longer have any stable forms upon which to place our mindfulness. There’s nothing steady to refer to. At this groundless point, instead of mentally thrashing about trying to find a form to grasp, formless shamatha allows us to rest on any experience without being swept away. It’s not a problem if we don’t have a body to come back to. We simply place our mind on whatever is happening and gain stability from that. Formless shamatha is a lifesaver that keeps us from drowning in a bewildering ocean of after death experience.

Seeing the Gap Between Thoughts: A Glimpse of Dharmata

“If by eternity is understood not endless temporal duration but timelessness, then he lives eternally who lives in the present.” Ludwig Wittgenstein

The simplicity of mindfulness belies its profundity. It is the gateway to immortality. Trungpa Rinpoche taught about the four ways to relate to the experience of time, emphasizing the fourth moment. The first three “moments” relate to the conventional experiences of past, present, and future. The fourth moment is timeless, and therefore immortal. It’s beyond the first three. (“Beyond Present, Past, and Future Is The Fourth Moment”, Chögyam Trungpa Rinpoche)

The fourth moment is the immediate experience of the bardo of dharmata, which transcends time and space. (In Tibetan Buddhism, the Bardo of Dharmata is the second of the three bardos, or after death states. “Dharmata” means “suchness,” and refers to the nature of reality, the enlightened state. )

“The yogi learns to forget the past and takes no thought for the morrow. He lives in the eternal present.” B.K.S. Iyengar

Even though it transcends the first three moments, the only way to enter the fourth moment is through the inlet of the present. Nowness, in other words, is the funnel into eternity. If you can’t see this in the gap between your thoughts, you can get a feel for it when you’re immersed in an activity.

If you’re one hundred percent present, whether it’s playing with your kids, being at a great concert, or engrossed in work, time seems to stand still. You may come out of such an experience, look at the clock, and be startled by how much time flew by. This is a concordant experience of the fourth moment. The entry into the realm where time, and therefore you, disappears. These magical states are what psychologists call the state of “flow,” and athletes or musicians refer to as the “zone.”

“Fulfillment is a byproduct of how people engage their tasks . . . Most of us are egotistical and most are self-concerned most of the time, but it’s nonetheless true that life comes to a point only in those moments when the self dissolves into some task. The purpose in life is not to find yourself. It’s to lose yourself.” David Brooks, NY Times article, “Its Not About You”

When we become so absorbed in something other than ourselves that we lose ourselves in some task, it is because we have found some degree of the fourth moment. The trick is to lose yourself properly. If you get lost in thoughts, memories, anticipations, or an entire life, that is just distraction, the opposite of shamatha. To lose yourself properly is to find the fourth moment. This puts you on the spot of reality, not off of it.

The zone of the fourth moment can be cultivated by training the mind to be present.  Those who achieve shamatha can rest their minds in meditative absorption, or samadhi, and taste immortality. They have tripped into the deathless zone of total presence.

Despite the complexity of the bardos, the meditations which prepare us for them don’t need to be complex. Simplicity and relaxation are two key instructions for the bardos. Don’t underestimate the power of mindfulness.

“Since the consciousness [in the bardo] has no support, it is difficult to stabilize mindful intention. But if one can maintain mindfulness, traversing the path will be trouble-free. Meditating for one session in that intermediate state may be liberating.”-  Naropa

Excerpt From the book “Preparing to Die: Practical Advice and Spiritual Wisdom from a Tibetan Buddhist Tradition”