by Cindy Wilson | Death and Dying

To address questions about the karmic implications of suicide, it helps to understand the four aspects of a fully established karma. What is a karmic action made of? How are the consequences of an act established? Even though the topic of karma has entered the public domain, it is perhaps the most complex topic in Buddhism. Only a fully enlightened Buddha can understand karma.

We will limit our discussion to how karma can help us relate to suicide. Understanding the aspects of a fully constituted karma also helps us relate to any action, and its karmic implications. What is it that packs the karmic punch? How can I soften the blow?

In the Tibetan Buddhist tradition, in order for an action to have complete karmic repercussions, four components must be fully present, as written about in Peaceful Death, Joyful Rebirth: A Tibetan Buddhist Guidebook by Tulku Thondup.

The Object of the Karmic Action

The first is the object, or target, of the action. If we take the extreme example of killing, the object would be the thing we’re planning to kill. If the object is really clear, be it an insect, an animal, or a person, the first component is complete and the karmic impact is loaded.

The second component is our motivation, which is the most important. If we want to kill something out of malice, then that aspect of karma is clear and complete. If we kill with the intent to feed our starving family or ourselves, or to save other sentient beings, then the karma is softened. Because motivation is so critical, it is helpful, revealing, and tempering, to ask yourself before you do anything: what’s my motivation? Why am I really doing this? This reality check can save you lots of trouble—and future lives.

Doing It or Not

The third constituent is the act itself. This is the clearest aspect. We either do it or we don’t. Unlike the other three, this aspect is usually black or white, yes or no. We either step on the bug or not.

Regret or Rejoice in the Act

The fourth constituent is having no regret, or rejoicing in the act. We look back upon what we did without remorse. If we’re glad we stepped on the spider we’re in karmic trouble. But if we feel deep regret, and vow not to repeat such an act, we have lightened the karmic debt. If each of these four constituents is complete, then the karma around the act is heavy. If we want to kill something out of anger, the thing we want to kill is clear, and we celebrate the act of killing, then karma is fully loaded.

Again karma is one of the most complex topics in Buddhism and truly understanding it is the realm of a fully enlightened Buddha. But we can cautiously take these four aspects and apply them to suicide, or euthanasia, and possibly better understand such acts.

The Object of the Karmic Action

The second aspect, our motivation, is also not clear. The motivation of most suicide victims is to remove suffering, which isn’t a bad motivation. Sometimes people kill themselves to hurt others. In this case the second constituent would be complete, and the karma correspondingly heavier. But a fuzzy intention softens the karmic impact. Many suicide victims, because of the intensity of their suffering, simply don’t know what they’re doing. It’s almost as if they’re drugged or stunned by the intensity of their pain. If you’ve ever been shocked with overwhelming bad news, or immense trauma, you know the bewilderment that accompanies such a blow. You just can’t think clearly.

Doing It or Not

The third constituent, the act of suicide, is complete. We either kill ourselves or we don’t. There’s nothing fuzzy here. This is where the karmic repercussions mostly arise.

Regret or Rejoice in the Act

The fourth constituent, having no regret, or even rejoicing, is completely absent. There’s nobody to rejoice in the act. Our action has cut off the last component.

Of the four aspects of a fully constituted karma, only the third is clear and complete. Two of the other three are hazy and incomplete, and the fourth doesn’t exist.

Does This Mean it’s Therefore Okay to Commit Suicide?

No, the Tibetan tradition is clear on this. Understanding these four components is to comfort those left behind, not to instill a justification for suicide. There’s a reason why the tradition speaks of dreadful karmic consequences. We should heed these warnings.

There are extraordinary stories of Lamas in Tibet being led to execution by the Chinese. Some of these Lamas would eject their consciousness (phowa) before the execution, an act that would normally be considered suicide. Some masters have said that these Lamas were doing phowa as a way to prevent their executioners from accruing the enormous negative karma of murder. In these exceptional cases, which only high Lamas are even capable of performing, “suicide” is the best karmic act. (See “Into the Jaws of Yama, Lord of Death” by Karma Lekshe Tsomo, p. 139 for other instances of religious suicide (the self-immolation of Vietnamese monks in protest of the war), and related issues.)

For the rest of us, no matter how we try to rationalize it, suicide is a negative act. Unless you are a realized being, whose every breath is taken to benefit others, you cannot kill yourself in a positive state of mind.

Suicide is a serious karmic act. But for those left behind, understanding the four aspects of a fully constituted karma can soften the pain, and shed some light on a very dark event.

If you or anyone you know is depressed and having thoughts of suicide, there are immediately available online resources that you should call. The American Foundation for Suicide Prevention has some excellent information and resources.

Related Reading: Relating to Suicide from a Buddhist Perspective

From Andrew’s book “Preparing to Die: Practical Advice and Spiritual Wisdom from a Tibetan Buddhist Tradition” 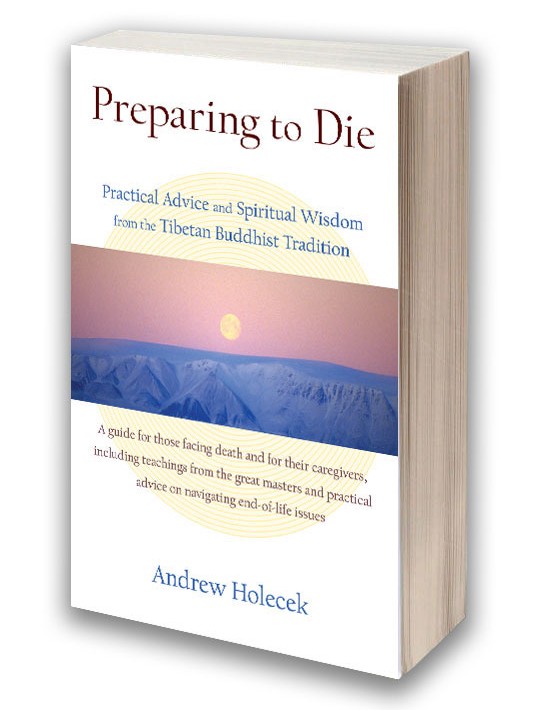 Practical Advice and Spiritual Wisdom from the Tibetan Buddhist Tradition